Will Cadell
imagery as a service
remote sensing
satellites
technology

Pt.2 Image is not everything

This is the 2nd part in a series on the commercial satellite imagery sector. It’s a wild ride, but you can catch part 1 here.

Some might argue that no one ever wanted the image; it is more of a by-product, a means to an end. Imagery consumers want to know something about the image, perhaps a piece of data the image contains. That might be a discernable change or it might be the number of cars in a parking lot, but once that data is extracted the image becomes redundant.

Additionally if you are collecting regular images then frequently downloading 200GB files becomes onerous, and storing them is a painful cost.

Imagery As A Service is becoming a key piece of every satellite provider. We are well beyond the simple idea of downloading an image from an FTP site. DigitalGlobe have been building out their Geospatial Big Data platform – GBDX for the last 2 years, in an attempt to make the interrogation of their enormous back catalog more reasonable. Astro Digital made their announcement recently about a new image API; Urthecast and Planet Labs also provide data almost exclusively via image services.

It is not just DigitalGlobe and Planet Labs in this sector. The commercial satellite space has a number of other very interesting companies emerging. One of those is Urthecast, the Canadian player in the game that went almost straight to the Toronto Stock Exchange.  Other players include Astro Digital, Black Sky and Hera Systems. These are just the private sector companies and don’t include the numerous national satellite programs which are currently orbiting our planet (Landsat, Sentinel, MODIS, RADARSAT…)

Satellite companies have not escaped the present market hostility, however. In fact publically traded stock prices of DigitalGlobe and Urthecast have declined steadily over the last six months. Obviously there are numerous external reasons to be cited for this decline. A common thread amongst the analysts is that a heavy reliance on government contracts for revenue is seen as a negative. Though, it’s clear that DigitalGlobe is generating significant ($100s of millions) revenue from this sector. 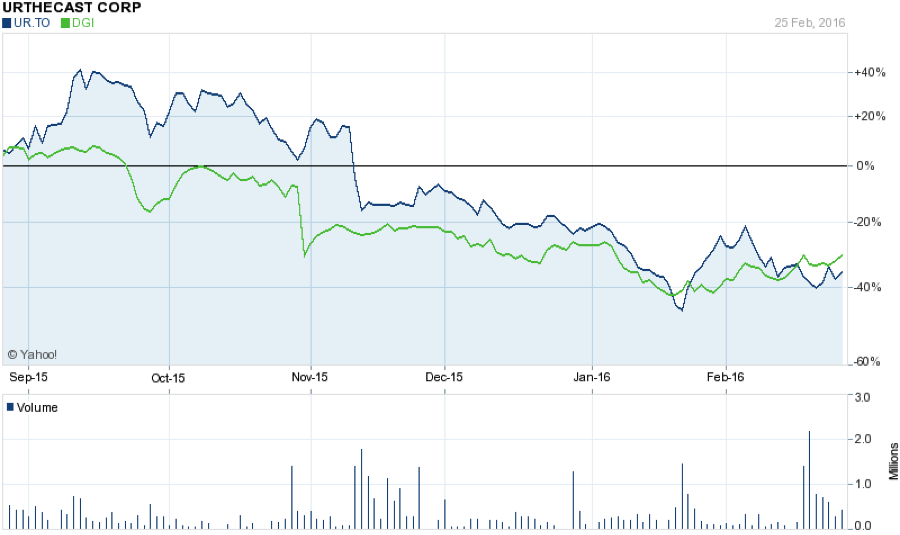 Indeed this DigitalGlobe’s recent announcement of a joint venture with TAQNIA and KACST suggest a further consolidation on the defense / security markets. In review, this deal will provide DigitalGlobe with access to 50% of the image production over the Middle East and 100% of production over the rest of the world, from a constellation of 6 small satellites. Initially, it was suggested that this would give DigitalGlobe access to a potential (and unprecedented) 40 daily repeats of the same location if desired. This would imply a targeting, off-nadir capability in the small satellites, which is unusual given typically small fuel / power storage capabilities for positioning from smaller units.

Apart from adding to the image catalog of DigitalGlobe’s Geospatial Big Data efforts, this announcement is a clear message to small satellite companies that they will soon provide high repeat as well as high resolution. Beyond that, they intend to combine these two products in some manner to generate a greater combined value. Initially the announcement suggested that small sat constellations were of “limited value”. Those references were subsequently removed. Nevertheless this move is a clear shot at Planet Labs’ ownership of the “high repeat market”.

Urthecast on the other hand has tried hard to grab some consumer market share, having worked on the latest Pepsi challenges. Within the last year (2015) Urthecast has also bought teh Spanish comapny Demios Imaging providing them with significant imaging capacity, a deal named by Euroconsult as the strategic acquisition of the year. Seemingly, however they are unable to delink their stock price from that of the price of oil, a common feature of Canadian stocks. This has driven their valuations lower than one would think reasonable for a company with so much development and engineering activity. Indeed Urthecast have announced the development of a constellation of 8 – 16 imagery / SAR satellites. Providing an interesting and somewhat differentiated sensor mix; SAR is complex to interpret, but has the compelling ability to see through cloud.

Industry performance of the other, as yet private, players is less clear to determine. Interestingly it is thought that a key part of the Planet Labs acquisition of BlackBridge was their “purchasing” access to immediate revenue as well as an active constellation with back catalog. In one acquisition, Planet’s business challenge switched from data acquisition to platform development. Creating a revenue channel in the face of a more difficult investment climate in effect deepens their war chest and lengthens their runway to achieve their revenue targets.

It should be noted that with rumored launches Planet is due to achieve their stated mission of a daily repeat of everywhere on Earth this year (2016). This will be a product we have never seen before. High repeat satellite remote sensing products will be completely dependent on the development of new delivery mechanisms and image services. The platform becomes a key part of the product.

The skies are getting busy.

The Game Is Afoot

There is little doubt that the real winner in this space race will be the consumer of image data. With this much image data soon to be available commercially, how will we the consumers be looking at the Earth?

There is little doubt that the Holy Grail for the image acquisition companies is the development of compelling consumer tools. The lack of a “killer app” for consumer remote sensing is the biggest risk to every satellite company. It is likely that the first company to truly solve this product / business problem will suddenly develop a significant edge.

It is clear that increased satellite remote sensing competition has fuelled the industry’s growth. We as the ever-hungry consumers of data will only benefit from this situation.

What is less clear is how the companies delivering an ever-increasing excellence of image product and regularity of image capture will take those products to the consumer. That will surely indicate a step change in the adoption of remote sensing technology.